Cat got your tongue? - Origins of Six Common Idioms 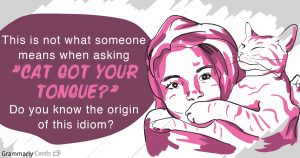 Let’s not beat around the bush; no one uses idioms in everyday life. Maybe once in a blue moon, but anyone who says ‘it’s raining cats and dogs’ must be off their rocker.

Hang on- I’m only pulling your leg! Idioms are little maxims that have become part of our speech through extended use over time. However, those with autism or learning difficulties can often struggle with idioms because of their figurative nature, and it’s not hard to see why! We’ve compiled a list of the origins of the ten weirdest idioms to see if we can find some method in the madness.

Meaning: To begin a friendship, particularly with a new person

Origin: Back when ships were the main form of transport, ships would sometimes get stuck in ice during the winter months. The country receiving the ship would send several smaller ships to ‘break the ice’, clearing the way for the incoming vessel and showing respect between the two countries.

Meaning: To be completely mad

Origin: Despite its apparent links to ‘Alice in Wonderland’, this idiom actually originates from 17th century France. Hat makers would often fall ill with mercury poisoning from the lead used for their felt, and the ensuing symptoms of timidity, tremors and irritability would make a person appear ‘mad’.

Origin: British Naval Captain Horatio Nelson was blind in one eye. When signalled to stop attacking a Danish fleet, Nelson held a telescope to his blind eye and claimed not to see the signal. He then continued attacking and emerged victorious.

Meaning: To behave in a hostile way towards someone

Origin: In medieval England, it was the custom to be given a slice of meat from a shoulder joint when your host wanted you to leave. It was, essentially, a polite way of saying ‘please leave now!’

Meaning: To relax and let loose

Origin: Another medieval saying! Ladies of the period were expected to tie up their hair when in public, so they could only ‘let their hair down’ and relax when at home.

And, finally, perhaps the most famous idiom of all: 6. It’s raining cats and dogs

Origin: Cats and dogs would often hide in the warmth of thatched roofs, but when it rained, they fled in search of better shelter. The barrage of cats and dogs jumping from high up made it seem as if was really raining cats and dogs!

Want to help your child practise idioms? Our Idiom of the Week Pocket Chart provides a light-hearted way to learn about idioms and their meanings. For on-the-go practise, try our Idioms Fun Deck, featuring brightly-coloured playing cards which explain idioms through amusing cartoons. Both available from sensorydirect.com today! 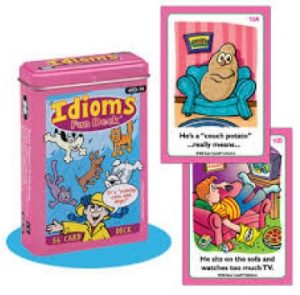 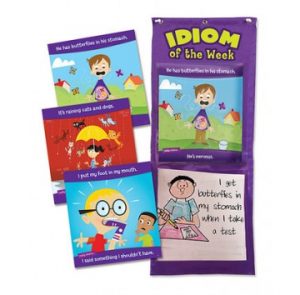 Stay in the know

Get exclusive deals you won't find anywhere else straight to your inbox.

We'd love to send you money-off vouchers, exclusive offers and the latest info from Sensory Direct by email. We'll always treat your details with the utmost care and won't share them with any third party. You can, of course, opt out of these communications at any time! See our Privacy Policy for more info.